RubNNet4MD
You are here: Home

RubNNet4MD is a program package developed at the Center for Theoretical Chemistry of the Ruhr-Universität Bochum that implements high-dimensional neural network techniques for use in computational physics and chemistry, in particular molecular dynamics and Monte Carlo simulations with a focus on applications in molecular sciences. High-dimensional neural network potentials (HD-NNP) have been pioneered by Behler and Parrinello [1]. The fundamental methodology and its subsequent advances have been repeatedly reviewed by Behler [2, 3, 4]. The main idea is to use artificial neural networks (NNs), specifically fully connected feed-forward NNs, trained against a set of reference data to represent the potential energy surface (PES) and interatomic forces of various finite molecular and extended condensed matter systems.

Within the HD-NNP framework, the total energy of the system is represented as a sum of atomic contributions which are the output of atomic NNs. These atomic NNs take as input a precise fingerprint of the chemical environment around the considered atom described by "symmetry functions" [5] that ensure a description of the local environment which is fully invariant to translation and rotation as well as to permutations of all atoms of the same type. The typical architecture of these HD-NNPs is schematically depicted in Figure 1. Interatomic forces can be obtained by differentiating the neural network PES, which can be done analytically. Reference force information can also be used during the training of the NNPs in conjunction with the reference energies.

Figure 1. A schematic depiction of the architecture used in high-dimensional neural networks. Figure from Reference [6].

RubNNet4MD is a Fortran program to easily and efficiently train such NNs for the description of molecular and condensed systems. The program also provides a standalone library for the evaluation of these NNs that can be used in separate molecular simulation packages, notably including CP2K. Various aspects of RubNNet4MD are influenced by the RuNNer program [7], which was the first general implementation of HD-NNPs created by Jörg Behler while he was the head of an independent Emmy Noether Group here at the Center for Theoretical Chemistry at RUB.

So far, we used such HD-NNPs since 2018 to accurately represent global potential energy surfaces in full dimensionality (NN-PES) of molecular complexes and clusters at essentially converged Coupled Cluster electronic structure accuracy for use in molecular simulation with classical and quantum nuclei [8, 9, 10, 11], see Figures 2 and 3. 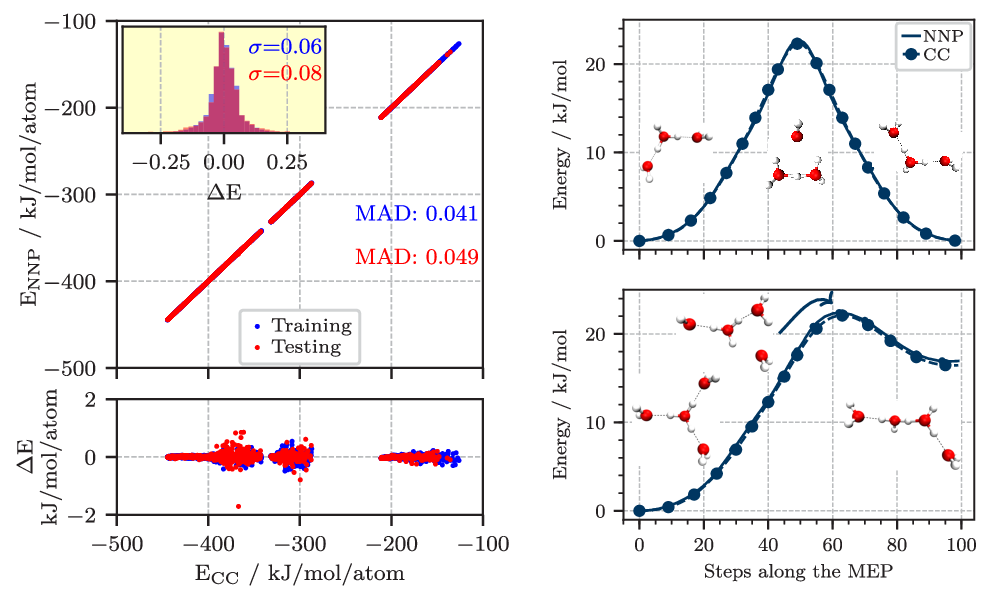 Figure 2. Left: Correlation of the energy per atom from explicit CCSD(T*)-F12a/aug-cc-pVTZ calculations (CC) and the NNP predictions for the final reference data set describing protonated water clusters from the hydronium cation, H3O+ up to the tetramer, H9O4+. The mean absolute difference (MAD) for the training and test set are given in blue and red, respectively. The lower panel shows the errors, while the inset in the upper panel shows the histograms of these errors including the corresponding standard deviations (σ) in the respective color. Right: Potential energy profiles of the H7O3+ (top) and H9O4+ (bottom) clusters along selected minimum energy paths (MEP) obtained using the zero temperature string method on the neural network potential (NNP). The coupled cluster (CC) reference was obtained by recomputing the energies along the NNP paths at representative points and is marked with circles. All energies are shown relative to the respective equilibrium structures. Figures from Reference [6]. 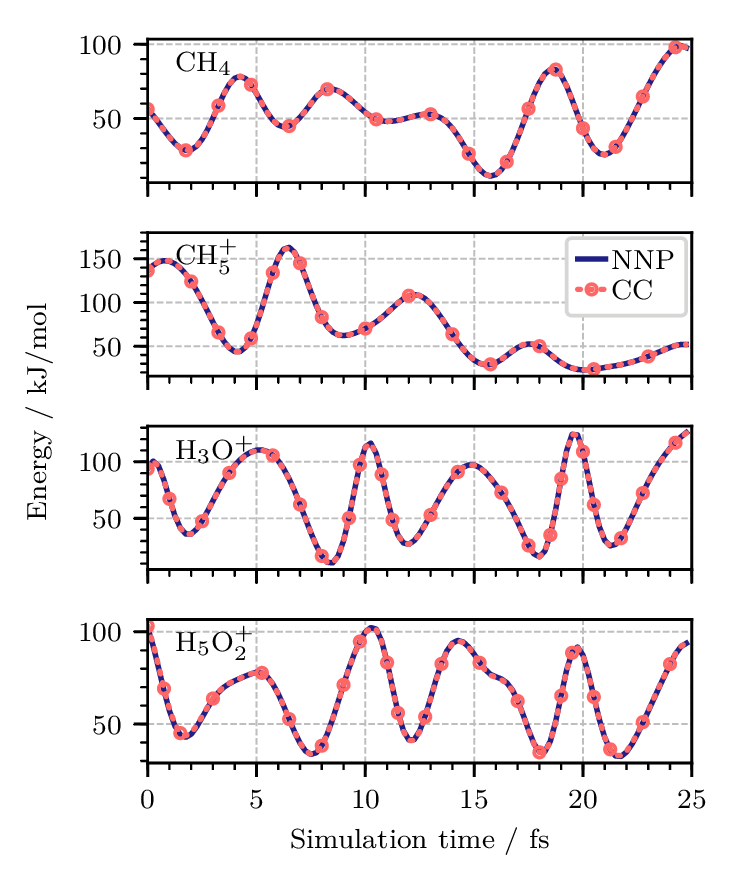 Figure 3. Potential energy along one replica of quantum PIMD trajectories of (from top to bottom) the methane molecule, CH4, the protonated methane complex, CH5+, the hydronium cation, H3O+, and the Zundel cation, H5O2+, at 1.67 K using neural network potentials (NNPs). The coupled cluster CCSD(T*)-F12a/AVTZ reference data (CC) were obtained by recomputing the energies at each step of the NNP trajectories and are shown as red dotted lines. All energies are reported relative to the equilibrium structures of the respective global minima. Figure from Reference [10].

A similar technique has been used successfully to describe the weak van der Waals interactions of helium with molecular species, see Figure 4. 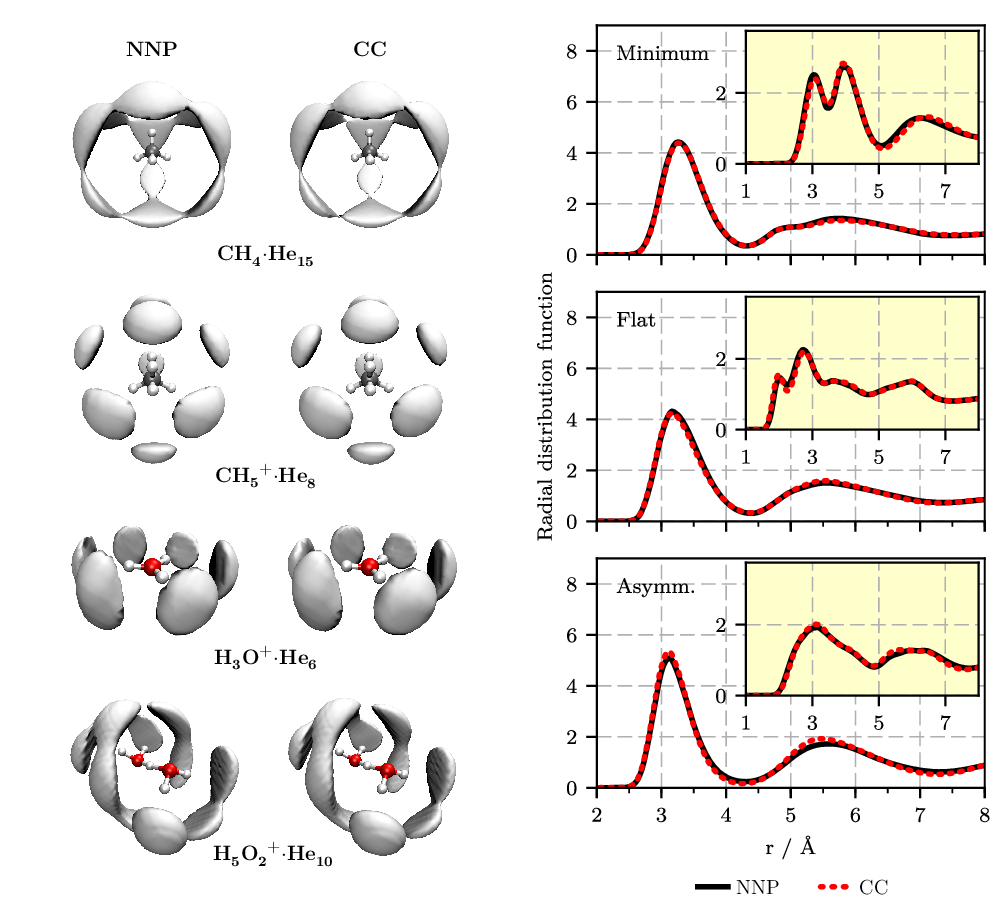 We are currently working on generalizing the HD-NN approach to the description of other properties than energies and forces.

It gives us great pleasure to thank Professor Jörg Behler for an enjoyable initial collaboration on his HD-NNP technique as well as for precious discussions while developing our implementation.